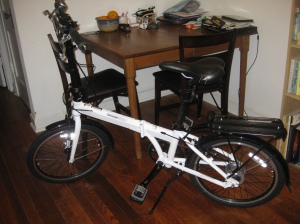 The idea was simple. Take baby steps to introduce more riding into my week. Bike to work, take the Metro back home. Get a folding bike to be able to take the bike onto the Metro.

I bought the Raleigh Folding i8. In many respects, it’s a great commuting bike. It comes with a rear rack, and I bought fenders. It has an 8-speed internal gear hub, which shifts smoothly. It spins up hills slowly, but without resistance, so it doesn’t feel like you’re straining. Dare I say– it’s really fun to ride.

The problems developed when I took the Metro.

I tried my commute out on Monday when it was raining. I biked to the station as usual, then got to the entrance and tried to fold my bike. It took me a while to figure out to fold it, even though I practiced at home first. When I finally got it folded up, I lugged it to the elevator– and discovered how heavy it really was. I can’t find any specs on how much it weighs– it seemed manageable in the bike shop. My companion in the elevator even thought to ask me how much the bike weighed, which was indicative of my struggle to carry it.

I managed to just miss the train while I dragged the bike to the door. I got on the next one, and was dismayed to see that even folded, it took up the width of the aisle. The fold wasn’t as compact as I thought it was. Luckily, it wasn’t crowded that day, so there was no negotiation with other riders to carve out some room.

When I got off, I took the escalator, standing on the right with the bike in front of me. A Metro employee gave me a stern look and said, “Young lady, you cannot take your bike on the Metro during rush hour without putting it in a bag.” He then gave me a printed brochure about the rules for bikes. sigh.

I went back out into the rain and biked to work. I locked up my bike outside, fearing that I wouldn’t be able to take it inside the building– by this point, I didn’t feel like confronting another person about rules. At the end of the day, I biked back to the station, wrestled with folding the bike again, did my best to sneak past the Metro staff (who were helping other customers), and got on the train home.

My inaugural trip with the i8 was a failure. This was supposed to be an easy way to bike more. I spent too much time being frustrated with folding and carrying it. I’m sure learning to fold it correctly will come with practice. It’s not as if I am not strong enough to carry the bike, but the less-than-compact fold makes it rather unwieldy, and its heaviness makes it less than enjoyable to carry.

I bought this bike because it was reasonably priced for an internal gear hub. But now I’m wondering if I should have spent more money for a lighter, more compactly folded bike. I honestly don’t see myself doing this routine every day– I would hate the inconvenience of lugging the folded bike around. It would actually be easier to HTFU and just ride my commuting bike to work and back a couple times a week. And, quite honestly, I don’t really have the room for another bike. I’m disappointed that this experiment didn’t work the way I had hoped. Live and learn, I guess.

I think this bike would be great for someone who needs an urban commuter and has a limited amount of storage space. It’s not so good for someone who wants to do multi-modal commuting on a daily basis, as I have discovered, but I think it would work for the occasional bike-to-Metro trip.

If you’re in the DC area and are interested in the bike, I’ll take any reasonable offer. [Bike has been sold– thanks!]

4 thoughts on “An Unsuccessful Attempt at More Biking: The Raleigh Folding i8”