Flat as a pancake.

My goals for the Flatbread 200K this year were modest. I wanted to not have any mechanical problems and to finish on time. I had a secret goal of not wanting to be lanterne rouge— not that there’s any shame in that, but I don’t like to keep people waiting.

I was given an offer I couldn’t refuse.

I met Mike at the 50 States ride this past summer, at his house. At the rest stop at his house, he told me about his tandem bike, and how we should go on a ride together on it. I thought he was trying to sell me the Brooklyn Bridge, so I didn’t take him seriously.

He asked me again whether I’d be interested in riding the tandem when I told him I was going to ride the Flatbread brevet. I started to consider it when I realized that 1) I wouldn’t be riding alone, 2) we’d be going fast on a tandem on a flat course, and 3) I’d be riding with an experienced rider. After taking a quick test ride, I agreed to do Flatbread with him. 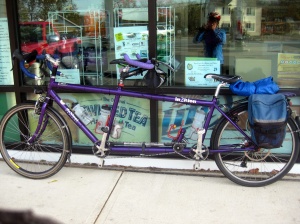 The selling point for this bike is its independent drivetrain, which allows the captain (front person of the tandem) and the stoker (the rear rider) to pedal independently of each other, which makes starting and stopping much easier to coordinate. More on this later.

Before the Ride
I woke up at 4:30 am the day of the ride to get ready. Mike came by to pick me up around 5:30 am. We had some issues getting the pedals off my road bike to put on his tandem, but once he got them off, we were on our way to the Eastern Shore. Traffic to the ride start was light, and I saw the sun rise over the Bay Bridge. I was barely conscious at that hour, but Mike was powered by Coke and was chatting about “racetracks,” otherwise known as multi-lane highways. We also talked about other brevets that he has done.

At the Ride Start: Control #1
We parked in the parking lot and saw a lot of people getting ready for the ride. In a rare reversal, Felkerino and MG were on single bikes instead of a tandem! I spotted Crystal and Adam, and John there as well.

Mike and I registered for the ride on site, and I happened to see @bilsko at the start. The usual announcements followed, and then we were off!

Control #2
It was a chilly start– I wore a flapcap, a Buff, a thermal jacket with long-sleeved jersey and silk undershirt, thermal tights, wool socks, and toe covers on my shoes. Still half-asleep, I was pedaling along, getting used to riding the tandem. We rode for a ways with Felkerino and MG, which was nice. We lost them after a while, since we ended up taking more time at stops later on. We rode then with Crystal and Adam.

Dolce Bakery remains my favorite unofficial stop. I guess other randonneurs felt the same way– there was a crowd outside the store! I got a pumpkin bar and a breakfast cookie. I meant to save the cookie for later, but I discovered I was still hungry, so I ate that too. I had the pleasure of meeting Iron Rider in person at this stop– quite the gentleman.

By this point, my butt really started to hurt me. Beyond the usual soreness, I felt like the saddle was digging into my bones something awful. I was using my own saddle, but I’ve never experienced this much pain. Mike made some adjustments to the seatpost, which made it a little better, but I was shifting my weight on the seat and standing up once in a while throughout the rest of the ride.

Control #3
The third control, at Slaughter Beach, was ten miles from Dolce. Slaughter Beach was where I had flatted last year, and wasted a lot of time off the road. This year, we got there early and left without seeing the beach, which was fine by me. It was warming up and I started shedding some layers– luckily, we had bags to put our clothes in.

Control #4
Control #4 was an open control, meaning we could stop at any store in town and get a receipt showing what time we were there. Because we had enough time, Crystal, Adam, Mike and I stopped for lunch at the Federal Street Gallery and Espresso Bar in Milton, DE. I had a turkey sandwich with chips and a cider. What a luxury to sit down and eat! We met up with Bob from North Carolina– it was nice to chat with him.

Control #5
Only 40 miles to go. Mike was feeling good and wanting to pick up the pace. I was still in some pain, but I was motivated to finish before it got too dark, so I gritted my teeth and pedaled away. We rode with John, and would alternately meet and pass Crystal, Adam, and Bob. Mike noted the funny names of roads that we passed by– Thirteen Curves. Double Fork. Hog Range. We took turns standing on the pedals.

We made one more pit stop in Denton, MD, before sprinting through Tuckahoe State Park and returning back to the ride start. It was dark when we arrived, but not pitch-black. I clocked in at 5:34 pm– almost 3 hours before the ride closed, and nearly 3 hours before my time last year. We did it!

There was (warm) pizza at the finish, and I chatted with Felkerino, MG and other folks before heading back home.

Many thanks to Mike for being a great captain on the tandem!

Mike and I. photo by MG

And congratulations to Crystal and Adam for completing their first brevet! Crystal’s ride report can be found here.