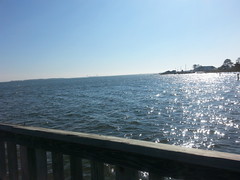 A few of my friends and I have started a tradition of meeting every year for the Ocean to Bay bike ride in Bethany Beach. They drive from Philadelphia, and R and I drive from DC to meet in Delaware to ride together. This year, we expanded the DC contingent to add Jane, Nathan, and Rootchopper(!).

Some things don’t change: it rains at least one of the days in our extended weekend, and there is confusion at the start of the ride. I signed up R and I to ride the metric century, but he didn’t feel like he had enough miles under his belt, so he wanted to switch to the 50-mile ride. Jane and Nathan also wanted to do the 50; Rootchopper and I wanted to do the metric. I didn’t see my Philly friends at the start of the ride. Although it was a sunny day, it started out cold and windy. I was getting cold standing around talking, so I wanted to get on the bike and go! Rootchopper and I headed out for the ride.

Did I say it was windy? The first leg of the ride was nothing but headwinds. I felt like I was pedaling hard for very little gain. I looked down at my Garmin– I’ve only gone for a mile and a half? If this is what it’s going to be like for the entire ride, I thought, I may not make it to the end. Mercifully, the route had us turn around on the Coastal Highway, and the headwinds became tailwinds, if only for a short while.

There were only a few people starting the metric route when we started, which gave us the luxury of space. When we doubled back, we met up with the riders doing the other routes, and the ride became crowded. Along the way, I met up with two of my Philly friends, Steve and Dick. We rode for a while together until the first rest stop, at Holts Landing State Park, which overlooks the Indian River Bay. 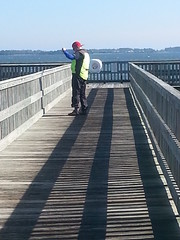 There was a long line for food and water at the first rest stop. I opted to pass, as I did bring some of my own. I rode out with Steve and Rootchopper until Steve’s 30-mile route diverged from us, and then the crowd thinned out. It was also starting to warm up, and for a while, the winds subsided. I got into a good groove and was in the zone. Rootchopper and I chatted along the way.

At the second rest stop, I was happy to see that one of the food options was hoagies. And not just hoagies, but my favorite kind– the “Day After Thanksgiving,” which has turkey, stuffing, and cranberry sauce. Against my usual practice of not eating too much on rides, I had two slices. Yummy. 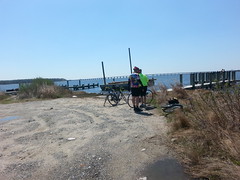 The ride had a few out-and-back trips, which made for nice photo opportunities of the various Delaware bays, but caused some bike traffic jams. One more rest stop, and then it was a beeline to the finish.

We all met up at Dogfish Head in Rehoboth Beach, which is my favorite part of the ride. A nice reward for a great day. 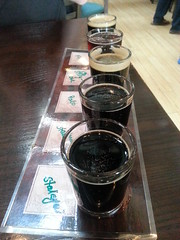 I look forward to continuing this tradition.