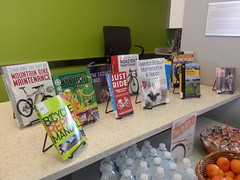 Believe it or not, sometimes I like to ride my bike for things other than food. I also like to ride for good causes.

Libraries hold a special place in my heart, and not just because I work in one. I strongly believe that public libraries do a world of good in the communities they serve, and they should be recognized for the services they provide for their neighborhoods. I love going to city libraries, as you can learn a lot about what they find important to make available for their patrons.

When I first heard of the Tour de DCPL, I was intrigued. A bike ride that tours around the branches of the DC Public Library– how cool is that? Schedule conflicts every year had prevented me from participating– until yesterday.

Now in its 5th year, a group of staff members from the DC Public Library plan a bike route that showcases different branches in the library system. This year, the wonderful women of Black Women Bike assisted in marshaling the riders to make sure everyone rode to the locations safely. 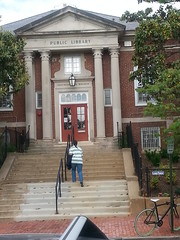 We started at at the Southeast branch, where folks signed in and stood around until the ride started. According to one staff person, about 60 people had signed up for the event. It looked like maybe half showed up. There was a great mix of folks at the ride– quite a few librarians, some kids either riding or in a trailer, people who had ridden the event before, and people who, like me, were riding it for the first time. The weather started out a little brisk for a May morning, but it turned out to be sunny and pleasant. Maggie Gilmore, one of the founding members of the Tour de DCPL, gave the opening announcement, and then we all got on the road and headed out. 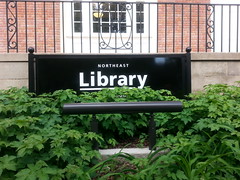 Our first stop on the ride was the Northeast Library. This branch recently went through major renovations. A staff member from the library welcomed us, and took us on a brief tour inside. He then joined us on the ride. 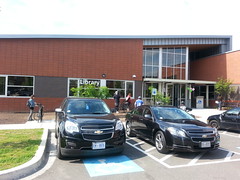 Our next stop was Rosedale, a relatively new library to the system. One of the children’s librarians (also a bicyclist) made a display of bike-themed books for kids. 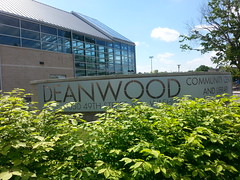 Across the river, riding on Benning Road (taking the lane!) led us to the Deanwood Library. The library is connected to the community center, which has a pool with a water slide. Someone asked whether the library had books that could be used in the pool. The staff person at Deanwood quipped that you could take the books into the pool, but you couldn’t take them back out. Even if they didn’t have waterproof books, it was a great place to visit and they gave us snacks and water. 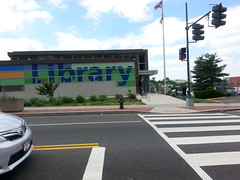 From Deanwood, we rode briefly on Marvin Gaye Trail. Back on Benning Road, we rode past the Dorothy I. Height Library (aka Benning Library) but didn’t stop in. We got on the Anacostia Riverwalk Trail and rode along the river. On the trail, we stopped to hear representatives from the DC Department of Transportation talk about their upcoming projects involving bike trails, including the Kenilworth Aquatic Gardens Trail that just began. 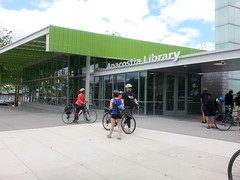 Our next library stop was the Anacostia Library, where we got more snacks and a tour of the environmentally green building.

Finally, we went back on the Riverwalk Trail, crossed the 11th Street Bridge, and finished at Southeast Library.

I enjoyed the friendly, laid-back bike ride, and I very much appreciated the time the library staff took to talk with us and give us tours of their neighborhood libraries. Thanks very much to everyone involved in this year’s Tour de DCPL. I hope to explore other branches of the library next year!

Bike resources, including various bike programs that the library sponsors (family rides, bike clinics, etc.) can be found at http://dclibrary.org/bike