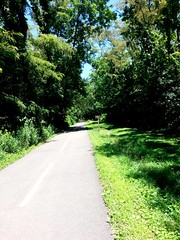 The last time I rode on the W&OD Trail, it occurred to me that I had never gone to the end of the trail to Purcellville, VA. I had heard nice things about that part of the trail– that it was much prettier out there, and there was a certain establishment that had amazing hot dogs. I hadn’t done a long ride in a while, so I wanted to ride out to Purcellville. I sent a call out to my #BikeDC friends, and Ryan, Justin, Ted, and Rootchopper(!) John responded.

We were to meet where the Custis Trail intersected with the W&OD. I had ambitious plans of starting really early to beat the heat and get home at a decent hour. That idea was totally unrealistic. The day before, on the 4th of July, I had played in a parade and then stayed up way too late watching fireworks and hanging out with some friends, so I was already pretty exhausted when I woke up early Saturday morning. And although I correctly calculated how long it would take me to get to the start point, I somehow misjudged when to actually leave my house. When I got into DC, I had to frantically tweet the guys and let them know I would be late.

I ended up forty minutes late from the time I had promised to be there. It was slightly chilly this morning (unusual for this area in July), and Ted was shivering. I apologized profusely– there were threats of me having to pull the peloton all the way to Purcellville as punishment. We headed out on the W&OD.

Our first stop was the favorite Caffe Amouri in Vienna for coffee and pastries. This was the fuel everyone needed to warm up and get going. Unfortunately, this was when I discovered that I lost any pickup in my legs and I struggled for the rest of the trip. The guys were patient at first, chatting with me along the way, but eventually they fell into their groove and I mine. Mine went something like this: draft off someone, fall off the back, ride by myself. Repeat. My legs stubbornly refused to move any faster, and finally I gave up and rode far behind everyone, watching them disappear from view.

We would regroup at pit stops along the way. Much of the scenery looked like this, following the power lines: 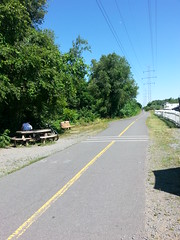 The last leg of the first half was from Leesburg to Purcellville, which was one long incline from one town to the other. It was a slog. The saving grace was that the trail became shaded by trees, and the crowds of bicyclists and runners that we had dealt with in the earlier part of the day thinned out considerably. Finally, we saw the END OF TRAIL marking. We made it to Purcellville, VA. 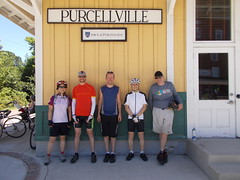 We made a beeline to Haute Dogs for some much needed lunch. I got the Banh Mi Dog with sweet potato fries. Delicious.

After we chowed down, we took a gander at a nearby store with a sign that said Bicycles and Coffee. It was a nice little place.

It was time to get back on the trail and head home. What seemed like an endless climb to Purcellville became a very pleasant coasting down to Leesburg. whee! After Leesburg, Ryan, Justin, and Ted sped back home to their respective family obligations. Rootchopper kindly rode with me on the return leg of the trip, pokey as I was. We stopped a couple of times along the way for ice cream and Arnold Palmers. There were signs on the trail for local breweries, but I opted to pass those.

When we returned to the start location, Rootchopper and I went our separate ways. I rode again on the Custis, making a pit stop at Key Bridge before crossing over and getting jammed up in Georgetown. I then was foiled by barricades near the Mall left over from the 4th of July, which prevented me from making some shortcuts. But I finally made it out of tourist hell and somehow regained my legs to sprint up the hills back home just as it was getting dark. R was waiting for me, and we went out for a celebratory beer and dinner at our local watering hole. I got home, washed up, and promptly fell into bed, exhausted but happy.

All told, I rode 114.1 miles in over 10 hours. Not fast, but done. According to my logs, the last time I did a ride that was over 100 miles was back in November 2012, when I did the Flatbread 200K with Mike on a tandem. The last time I did a solo century was the month before, riding the Seagull. Needless to say, I was overdue for a long ride. I can’t say that I’ve now done the W&OD from end to end, as I didn’t start in Shirlington at Mile 0 (although Ted got there on the way back), but I don’t feel the need to do that– riding Custis was enough. I’ll take a ride to the start someday on another trip.

It was a beautiful day for a ride. Many many thanks to John, Justin, Ryan and Ted for their patience and good company!

2 thoughts on “BikeDC Goes to the (Hot) Dogs: To Purcellville”