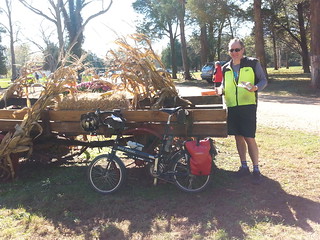 Last year, Rootchopper wrote about the Great Pumpkin Ride, which enticed me. I put it on my list of rides to do, and I was lucky to have the time free to do it this year.

I woke up at 5:30 in the morning, thinking that Rootchopper would come to pick me up at 6, but I got the time wrong. I slept on the couch for another hour until daylight started creeping in and I saw Rootchopper’s car park nearby. We loaded my bike onto the car rack, and away we went.

I was rather tired, having stayed up late the night before (unfortunately unavoidable), and I was worried that once again, I was too tired to ride. I kept yawning the whole drive down to Warrenton. We drove into the parking area and met up with Ultrarunnergirl and her friend, Boots.

My next challenge was to inflate my tires. I didn’t bring a pump, and I had problems working Rootchopper’s hand pump. He helped me once again, and then we rode to the starting point. There, we met up with Reba and her husband Robert, and the four of us rode the 47-mile ride together.

We almost got separated early on, where the 47- and 68-mile routes split off. I correctly went straight on, while the three of them turned right. I heard them yell my name, but I kept going, figuring I would meet up with them later somehow. When I pulled over to text Rootchopper to let him know where I was, I looked up to see Rootchopper, Reba, and Robert (the 3 Rs?) pedal past me. Hooray! I hopped back on the bike and sped to catch up with them.

The rest stops were not marked on the cue sheet, so the first one came up quickly and unexpectedly after about ten miles. My eyes grew wide at the sight of this: 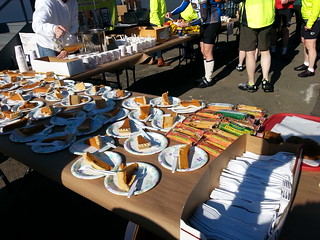 So many pumpkin goodies! Pumpkin pie, pumpkin bread, pumpkin soup, roasted pumpkin seeds. I thought I had died and gone to heaven. I should mention that I love all things pumpkin– I really do. And even better– this stop was at Old Bust Head Brewery, where they were giving free samples (to those over 21, of course) of their pumpkin ale.

After only ten miles in, I wasn’t in need of food, but there were so many things that I wanted to try that I had to partake of at least some of them. My only regret was that I didn’t try the (non-pumpkin) warm soft pretzels from the Gettysburg Pretzel Company.

Maybe it was the pumpkin, or maybe it was the unseasonably warm and beautiful fall day, but I soon forgot how tired I was. My climbing legs were in fine form, and the rolling hills didn’t seem so bad. We rode through trees with golden-colored leaves and alongside dried-up soybean fields. We rode by other bicyclists, who were dressed up for Halloween. There was an abundance of tutus, which made me wonder if I missed a dress code memo.

The second rest stop had more pumpkin deliciousness. The third and final stop had warm apple cider. At the last stop, Robert complained of leg cramps. Rootchopper and I rode on ahead while Reba and Robert rode tentatively behind.

A few more hills, a nice little tailwind, then back to the Warrenton Branch Greenway, and we were done. I felt pretty good. Reba and Robert arrived shortly after, and then we met up at Molly’s for lunch. We caught up with Ultrarunnergirl and Boots there as well. Rootchopper and I got Old Bust Head chestnut porters, just because.

I had a fantastic time, and I would love to do this ride again next year. Thanks go to the Fauquier Trails Coalition and their volunteers for hosting a well organized ride. And many many thanks to Rootchopper for giving me a ride and putting up with my antics! His account of the ride is here.