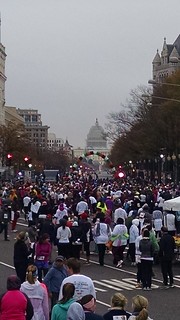 R and I participated in the Trot for Hunger 5K, hosted by the organization So Others Might Eat (SOME). SOME provides a variety of services for the homeless in DC, including food, health care, and counseling. My friend @rillquiet had done the run last year, and I was hoping to run with her this year, but she had hurt her ankle several months before. R agreed to run with me, and we embarked on an eight-week training schedule to get ready for my first 5K ever.

Training
As I had mentioned before, we trained using the Couch-to-5K program. This program was great in easing me into running. We trained three days a week for 30-40 minutes a day. Each day consisted of alternating between walking and running, gradually increasing the time spent running. It was challenging, but I never felt overwhelmed. We ran mostly around our neighborhood, which is rather hilly. At first, we had tried to avoid as many of the hills as possible, but there was really no way to entirely escape them. I suppose training on hills builds strength, but it sure doesn’t always feel good running on them.

Nevertheless, I did notice that as I went through the program, I figured out what pace felt comfortable for me in terms of my stride and breathing. I think my shoes and my brace helped a lot in keeping my ankle stable– I never once felt unsure of my footing. Mentally, however, I was having a more difficult time. I relied heavily on the program to tell me when to walk (relief!) to the point of being anxious of missing the cues. When we ventured on the trails, I was so used to the pace I take bicycling on them that it messed me up when it took me much longer to pass landmarks running. I unconsciously tried to run faster, until my body warned me that I was over-exerting myself. I obsessively looked at my Strava stats and wondered why I wasn’t getting faster or going longer. A week before the run, I still was not logging 5 km during practice, and I worried that I was not going to make it. I really wanted to be able to run the whole way through, and I tried to make peace with the fact that I may have to walk part of it. I was not doing a good job of convincing myself.

The Event
I woke up early Thanksgiving morning. Knowing that I couldn’t eat a heavy breakfast, I had a Larabar and some white tea. Temperatures were expected to be in the upper 30s/lower 40s F, so I wore a hat, a Buff, thin gloves, tech shirt, jacket, running pants, wool socks, and my shoes. I brought a sweatshirt for after the run.

R and I drove to the start. We got there early, so we parked the car and walked around for a little bit, trying to stay warm. Lots of people were milling around Freedom Plaza, and many were wearing turkey hats (in various representations of, uh, living to cooked). There were a few completely dressed as turkeys, and again with the tutus.

Fifteen minutes before the start time, we walked down to Pennsylvania Avenue. We headed towards the sign marking the slowest pace of runners. I was jumping up and down, trying to stay warm. I could feel my leg muscles tightening up from the cold.

The race began, somewhere up front– I couldn’t see or hear anything. We slowly shuffled our way to the start, and after several minutes, we were off.

The first several minutes were painful. I tried to go slowly so as not to burn out too quickly, but I felt like the impact of hitting the ground was knocking the bones inside my legs. We had to run around and past the horizontal lines of walkers, which disrupted my rhythm. I was cold. wah. Push past the discomfort, I said to myself, it’ll feel better soon.

The 1-mile marker came up more quickly than I had expected. Hello! We went around the turn– folks were high-fiving the policeman at the turning point. I did start to warm up, and I eventually shed my hat, Buff, and gloves, and stuffed them in my jacket pockets.

I missed seeing the other mile markers, but when we doubled back onto Pennsylvania Avenue, I realized I felt good and still had plenty of gas in the tank. I picked up the pace a little. When I could see the finish line, to R’s surprise, I sprinted towards the end. I was a little disappointed to see the clock time as I crossed, but I did it– I ran the whole 5K!

The numbers are not anything to write home about, but I did have negative splits, and my pace was faster than my previous practices. More importantly, though, I felt fine from beginning to end. I proved to myself that I can run, and after years of thinking I couldn’t, this was huge.

Many thanks go to SOME and their sponsors and volunteers. For those of you who had donated, my deepest gratitude. And thank you, R, for being my rock and never doubting my abilities. Happy Thanksgiving, everyone!