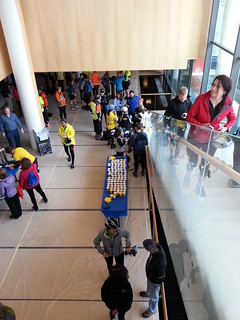 Of the WABA-sponsored rides I’ve done, the Vasa ride is my favorite, not because of the route, but more because of what it symbolizes to me– a shrugging-off of winter and a welcoming of spring.

As it usually is around this time of year in these parts, the day started out quite chilly. It was supposed to warm up by the afternoon, and there is always the problem of what to wear to accommodate the changing temperatures. I was feeling decidedly unsporty today– I don’t know why. I opted to wear a tech shirt, light jacket, Buff, wool hat, my knickers with chamois, a pair of stretch jeans (which are super comfortable), light wool socks, and shoes. It turned out to be just the right combination of layers.

My last organized group ride was last October(?!), and since then, I’ve just been doing the solitary commute with occasional jaunts closer to home. So, it was a real treat to ride into the city, and see my biking buddies Rootchopper, P. John, Felkerino, MG, Brian, Dave, and Ryan. I also got finally a chance to meet Ms. TurtleDub in person!

Once again, I did the Half Vasa. I rode the first half of the Half with Rootchopper and John. It was cloudy and windy, but it felt good to be riding. I wouldn’t go so far as to say that the climb up MacArthur Blvd. felt great, but I minded it much less this time. My legs felt strong.

At the rest stop, I opted for a matcha croissant and a pain aux raisins. A woman approached me to say, “I like your style. You’re wearing jeans, and yet you’re killing the ride better than the rest of us.” I didn’t realize my aversion to wearing bike pants (which I just did not feel like wearing) was so apparent.

It didn’t really warm up as much as I thought it would, and the winds remained pretty strong throughout the ride. The sun broke through on the return though, which was glorious. I ended up riding the C&O route a little longer than I should have, making my bike a muddy mess. But I finished the ride and made it back to the Swedish Embassy. I had a cup of the warm blueberry soup, which goes down quite nicely after a chilly ride.

A group of us went out afterwards for pizza. It was great to catch up with folks and hang out for a while, and then I headed home in the sunshine and headwinds, smiling the whole way back.