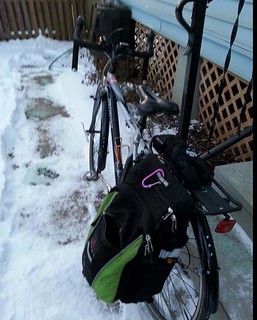 Freezing Saddles is a friendly competition by the Washington Area Bike Forum (aka Bike Arlington Forum). Basically, you bike from January 1st to the last day of winter (March 19). You gain points for every day and every mile you ride. You are assigned a team, and the team and individual with the most points win. Other prizes are given for side-bets and for any kind of dubious honor one can think up, such as the longest ride, or the lowest average miles.

It’s a fun way to encourage people to keep riding throughout the winter. It’s also an opportunity for statistics geeks to go nuts and parse the data in every which way possible. So, with that in mind, let me present a few pointless stats of my own.

Apparently, I did ride more than this time last year. Last year, I rode 237.12 miles in 30 days during that time period. This year, I rode 293 miles in 45 days. This doesn’t account for the differences in weather (and health) between the two years, so it’s hard to say whether competing in Freezing Saddles contributed to my riding more or not. With the exception of the Vasa ride, which I did both years, I really didn’t do any rides outside of commuting and errands. I didn’t try to add more mileage, which probably explains my low standings. I ended up in the bottom 20 percent of all riders, and barely rode more than half the days. The only stats in which I made it into the top third of the list were for miles ridden before sunrise and coldest ride. I also managed to only ride 2 days in which I rode less than 2 miles (affectionately known as sleaze days).

If nothing else, Freezing Saddles proved to me, with hard data to back it up, that I am not as crazy as those who will ride every day for as long as they can. I plan on showing the site to my friends and family whenever they say that I am insane for biking in the winter.

I will say that some of those crazy people were on my team, and they were fun to get to know.

Will I do this again next year? Probably. If I do, I would consider trying studded tires, and wearing a mask on the really cold days. But right now, I’m really glad it’s spring.

One thought on “A Few Thoughts on Freezing Saddles 2015”