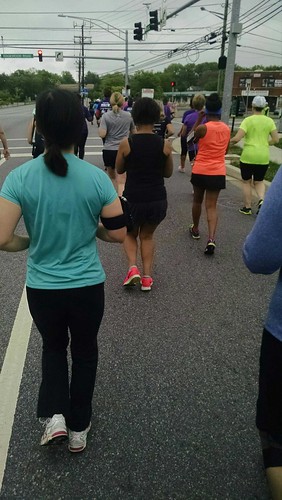 My first 5K of the year. Here’s how it went down.

Training
Training wasn’t as consistent as I would have liked it to have been. R and I started over on the Couch-to-5K program, but I ended up skipping days due to sickness and allergies. Blech. Once I got over this awful chest cold, I still had to use my inhaler for asthma. On the days I forgot to use the inhaler, it was pretty painful to run. I did feel like I got back into the swing of things about a couple weeks before the run.

Before the Start
R and I drove to the start that morning. As soon as we hit the parking lot, my stomach started feeling funny, and I made a beeline to the port-a-potty. Ew. I never had that happen to me before a run/ride. It must’ve been something I ate the night before. I was not feeling pretty chipper, and felt even less so in the face of some very enthusiastic volunteers. I watched some folks do a spirited Zoca dance warmup while I was silently praying my stomach would calm down.

The 5K
Finally, we were corralled at the start. People running with strollers got a head start, and then the rest of the runners began several minutes later. It was a small crowd, but I tried to position myself at the end of the runners line and before the walkers.

It was pretty cloudy throughout the entire race, and rather muggy. It’s been a while since we’ve gone through that humid of a day. According to my Strava stats, I started way faster than I had thought I did. We quickly came onto a small hill, and some folks walked it. I didn’t think it was that bad. The crowd thinned out within minutes, and we had plenty of room to run through the quiet residential streets. This being a family-friendly event, there were a few kids running with their parents. I think some of them were less than pleased to be there.

I tried to keep a steady pace throughout. There was definitely a moment somewhere in the middle of the run where I started dragging a little. I was amused by one woman who appeared to sprint for a few yards ahead of us, and then changed to walking. Whenever we caught up to her, she would begin sprinting again. This would happen over and over. I’m not sure what to make of that. We finally lost her in the last mile.

R and I had talked about working on lengthening my stride a few days before, and he asked whether I wanted to do this towards the end. I was having none of it. I did sprint the last tenth of a mile, trying but failing to catch up to the woman ahead of me.

Results
All in all, I felt pretty good throughout the entire run. I was pleased to see that I beat my previous time by two minutes– a new PR! But I was even more relieved to see in the race results that I placed squarely in the middle. It sounds kind of odd to say that I was happy being average, but given that this is only my second 5K ever, and that I’ve had problems with distance running when I was younger, being average is an accomplishment for me.

I have another 5K scheduled in a month. Will I continue to improve, or hit a plateau? Stay tuned.