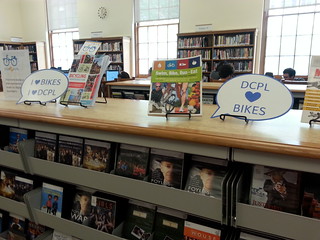 Many kudos to the folks at the DC Public Library for putting together this ride during National Bike Month every year. The Tour de DCPL is a social bike ride that makes stops at selected library branches to promote both bicycling and the various neighborhoods within the system. This year, the tour highlighted a few locations in the Northwest Quadrant. 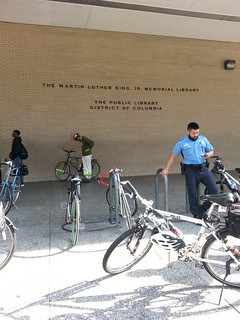 We started at the MLK Jr. Memorial Library, the central branch. While bicyclists flocked to the registration table outside the entrance, other folks were lined up and waiting to enter the library. It was an interesting juxtaposition of groups.

This year, we were honored with a police escort. Members of the bike unit from the District’s 2nd ward rode with the group, and they were kind enough to stop traffic at various points in our route to allow us to safely cross. 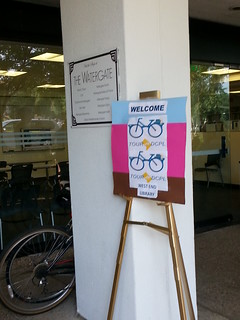 Our first stop on the route was the West End Branch, which is temporarily located within the Watergate complex while renovations at their original location are being completed. The interim branch itself just recently re-opened after the Watergate garage had collapsed. 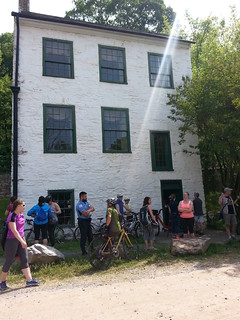 A quick jaunt on the Capital Crescent Trail led us to the Abner Cloud House, near the Fletcher Boat House and the C & O Canal. A couple of members from the Colonial Dames of America gave us a tour of this historic mill house. 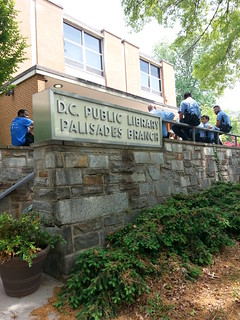 Our next library branch tour was at the Palisades Library. It was starting to get pretty hot outside, so I sat in the shade for a little bit. I had a nice conversation with a gentleman debating the pros and cons of fixed vs. geared bikes. 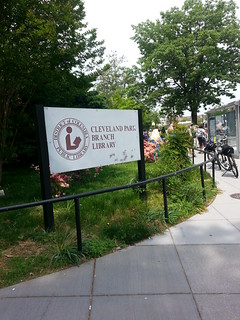 After some hill climbing and a missed turn (oops), we arrived at the Cleveland Park branch. We took a breather while a guest speaker, the librarian from the National Zoo (or “zoobrarian,” as she called herself) talked about her experiences. 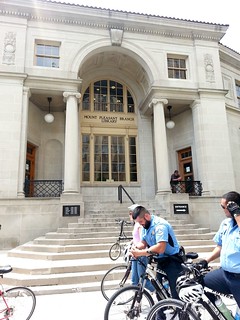 Our last stop was at the Mt. Pleasant Branch, which was recently renovated. I had a pleasant chat with David, one of the DC Public librarians, and his friend after the ride. 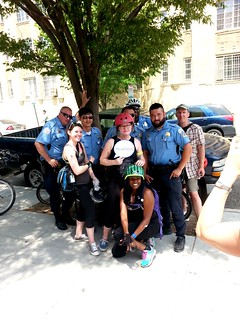