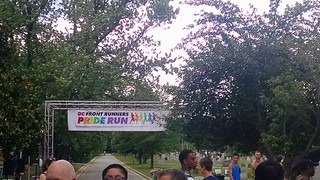 Some notes on the Pride 5K:

The run took place in the evening, which was the first time I’ve participated in any kind of organized event that didn’t take place in the morning. As a result, I didn’t know how to prepare for it, and my body didn’t know how to handle it, either. I was oddly really nervous for this race, and I wasn’t used to having to deal with the nerves all day. I opted to go for a big lunch of pasta, and didn’t eat after that.

There was a heat advisory that day, as temperatures climbed to 91 F and was very humid. I knew I had to hydrate, but I got to the point where I got sick (literally and figuratively) of drinking so much that I stopped. I was fine until I got to the race location, of course. I took a bottle of lukewarm water and rinsed my mouth and spit it out, trying not to drink too much so I wouldn’t get cramps later.

I ran with a team for the first time, too– friends of mine from my taiko group. Normally, I would have been more social, but the combination of nerves and feeling sick to my stomach made me less interested in interacting with anyone.

A thunderstorm warning was called about fifteen minutes before race start, and participants were urged to take shelter. I stood under a tree (I know, not the safest place to be in a thunderstorm), and watched a gentle rain come down. It dissipated quickly, and then we were called to line up again. There was a slight breeze, but it was still stupefyingly muggy.

And then, we were off. From the beginning, people were passing me left and right, and I managed to lose sight of all my team members, including R. The route had several turnarounds, and R had seen me and cut back to where I was to run with me. That was nice of him to do that.

The first mile felt fine. Halfway through, people were on the sidelines, handing out cups of water and sponges. I took a sponge, squeezed the water on my head, and gave it back to a volunteer. That felt good.

The last mile is always the killer. I saw a lot more people alternating between walking and running, and they still ended up ahead of me. Should I have done that? I just kept running at a steady pace. My side was cramping up, but I tried to ignore it.

I did not have it in me to sprint the last tenth of a mile. If I had done that, I would have probably thrown up.

I broke my trend of faster race times. This run was faster than the Turkey Trot, but slower than the Mother’s Day 5K. I was disappointed, but I kind of expected this. It was just too damn hot, and I was not as psyched up for this run as I could have been.

I still feel nauseous, even as I type this. Blech. I’m going to take it easy for the rest of the weekend.