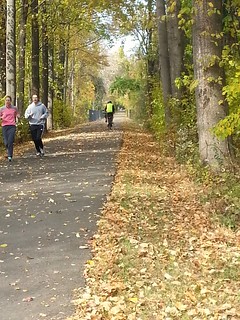 I loved this ride from last year, and originally signed up for the 48-mile ride. I had also unwittingly signed up to work that evening. argh. I wanted to do both, so I opted to do the 30-mile ride instead so that I could have time to go home, change, and go to work.

At first, I was having some doubts as to whether this was a good idea. Was it worth it to drive all the way to Warrenton, VA for a 30-mile ride? I needn’t have worried. The answer was yes.

The Fauquier Trails Coalition’s Great Pumpkin Ride remains, hands down, as one of the best rides of the region. The ride is well organized: the autumnal countryside route is beautiful, there are police on hand to direct riders at some of the trickier intersections, the volunteers are fantastic, and the riders are friendly. Oh, and of course, the food at the rest stops is awesome. 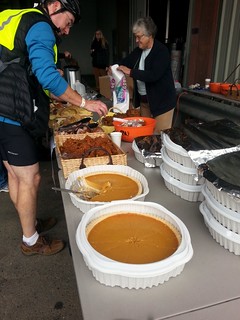 As last year, one of the rest stops was at Old Bust Head Brewery, where they were giving out free samples of their beers and a coupon for the taproom. They were also at the finish line with more beer for purchase. I really did like the two samples for this year, their Oktoberfest and Old Jail pumpkin-peach brown ale.

For the 30-mile ride, that was the only rest stop, so I made sure to stock up on food. Alas, there were no pretzels.

I was feeling a little stiff throughout the ride, but I managed to make it in fine time, so I skipped the festivities at the end and hit the road, stopping at my favorite Red Truck Bakery for a snack before heading home.

I made it to work at a reasonable time. I hope to be less rushed and do the ride again next year.

I was going to do a bike ride this month, but I got sick. I had two rides scheduled for October, but one was cancelled. Let’s hope I can do the other one.