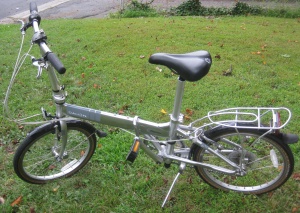 Meet the newest member of the bike family: the Dahon Mariner D7.

I bought this bike on Craigslist, and I couldn’t be happier. It’s a 7 speed, so I can ride up hills fairly easily. It has an aluminum frame, which means it’s light to carry. I also like the metallic look a lot. The rack and fenders come standard on this bike– perfect for commuting.

I’ve ridden a little over 40 miles on the bike now, mostly to and from the Metro station. I rode it once to work, then folded it up and carried on the train on the return. I shared a car with two full-sized bikes and a baby stroller, and noticed with smug satisfaction that my bike took up less space than any of them.

So, the idea is ride to work, then fold it up and take the train home. I just got the carry-on bag, so hopefully, I won’t be stopped by a Metro official. And with enough practice, folding and unfolding will become a breeze. I’ll report back after I’ve tried it a few times.

Despite being disappointed with the folding bike I had purchased, I was still determined to try another one. Bicycle Bug generously offered to lend his Dahon Curve D3 for me to test for a few days. We met up early on Friday, before Coffee Club, and I rode on the Dahon while he rode on a Capital Bikeshare bike.

It could be that I was already pumped up getting to Bug’s place, but I found that I could keep up easily with him on the ride. That was a good sign. And I got a lot of compliments on how I looked on the bike. That was nice, too. But the real tests were yet to come.
END_OF_DOCUMENT_TOKEN_TO_BE_REPLACED

The idea was simple. Take baby steps to introduce more riding into my week. Bike to work, take the Metro back home. Get a folding bike to be able to take the bike onto the Metro.

I bought the Raleigh Folding i8. In many respects, it’s a great commuting bike. It comes with a rear rack, and I bought fenders. It has an 8-speed internal gear hub, which shifts smoothly. It spins up hills slowly, but without resistance, so it doesn’t feel like you’re straining. Dare I say– it’s really fun to ride.

The problems developed when I took the Metro.
END_OF_DOCUMENT_TOKEN_TO_BE_REPLACED

I saw a deal for this bike, and I couldn’t pass it up.

It’s a Specialized Tricross bike, which I’ve outfitted with dual pedals so that one side is a flat platform that I can use with regular shoes, and the other side has a clipless system that I can use with cleats. The woman who sold me the bike had previously swapped the stock saddle with a Terry. She had warned me that it wasn’t the most comfortable, but it was better than what was on the bike originally.

I took the bike for a spin this morning. It is noticeably lighter than my hybrid was, but not as light as my road bike, but that is to be expected. The gears shift smoothly, and it feels great to be on a drop-handled bike again. The seat, admittedly, isn’t the greatest, but it’s not so bad that I want to swap it out yet.

This will be the bike I will use to commute to work, and for running errands. It’ll also be great for gravel trails. I’m looking forward to a good season with it.