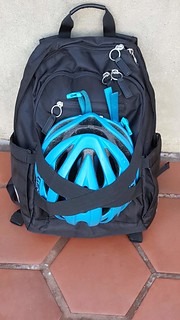 I seem to have a thing for panniers that convert into backpacks. As a dedicated multi-modal commuter, I like to ride my bike to the train station, and then hop on the train to work. I need bags that can do this shift with ease, and backpack panniers seem to fit the bill best for me.
END_OF_DOCUMENT_TOKEN_TO_BE_REPLACED

Back by popular demand! See Part One here. These are bags I have tried recently, and my reviews of them. I’m giving some of them away. If you would like one of the bags, leave a comment by this Friday, December 5, and let me know which bag you want. Update 12/8/2014: The giveaway has ended- thanks!
END_OF_DOCUMENT_TOKEN_TO_BE_REPLACED 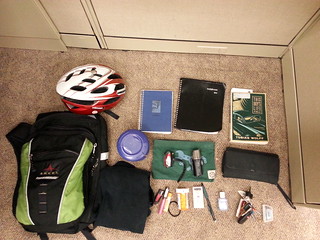 Inspired by MG’s post, which was inspired by this Lifehacker post, I thought it would be interesting to compare how much I carry on a given commute. This is typical for a multi-modal day, in which I bike and take the Metro. If I were riding to work, I’d also include some change of clothes.

My Arkel Switchback pannier/backpack has three compartments, and I have stuff in all of them.

Large compartment: cardigan (because it is fricking cold at work), plastic container for breakfast (granola), notebook, datebook, book for reading on the Metro (because I rock it old school), u-lock (not shown because it is locked to the bike)

A certain bicyclist (I’m not naming names) had teased me once because I carried so much stuff to work. This doesn’t look like that much to me.

Fellow bicyclist Ricky had shared his tips for what clothes to wear when bicycling in various temperatures. I think it’s a good guide on what to wear. For what it’s worth, here’s my guide for outerwear for both commuting and recreational riding. I tend to run colder than he does, so I tend to start layering earlier.

One more preparatory post before I launch into our journey. We planned on a 7-day bike ride in the beginning of October, staying in hotels along the way. My friends and I thought it would be useful to provide a checklist of things we brought for the trip. These are suggestions– depending on how long your trip will be, the time of year you travel, and your accommodations, the items will vary.

I’ve also included in the list things I brought that I ended up not needing, and things I wished I had brought. Some annotations are included. Brand names supplied are not paid endorsements.
END_OF_DOCUMENT_TOKEN_TO_BE_REPLACED