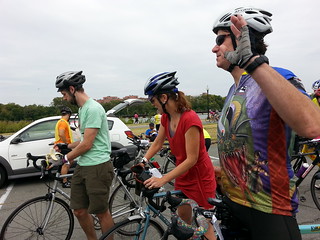 I was getting ready to go for a run last Sunday morning. I opened up my Strava app and was ready to record when I glanced at my friends’ posts. As I scrolled down, nearly every title had something about a tribute to Dave. Uncomprehending, I didn’t know what these titles were referring to, so I went over to my Twitter feed to get an explanation. I then found out that Dave Salovesh was killed by a speeding driver the Friday before. I sat down in my room and started crying.
END_OF_DOCUMENT_TOKEN_TO_BE_REPLACED 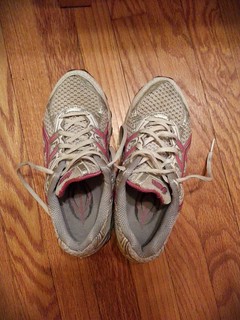 Little known fact: I used to run track in high school. It was the only sport offered that didn’t have tryouts, and I thought it would look good on my transcript or something. I was really bad at it. I mostly ran sprints, slowly. I felt like I was going to die, even at that distance.

In my junior year, I sprained my ankle badly during practice, and it’s never been right ever since. I used to sprain that ankle every other year, and it got to the point where being hobbled would depress me. I fell badly on my other ankle during martial arts practice a few years ago. After weeks of physical therapy, I used prescription ankle braces whenever I practiced. But I always felt unstable on my feet.

I quit running and martial arts. I took up bicycling. I discovered that I’m no faster a bicyclist than a runner, but I had fun biking.
END_OF_DOCUMENT_TOKEN_TO_BE_REPLACED

Sometimes, I look for other ways of pushing my body to the limit. Because why not?

A friend of mine recommended that I look at Neila Rey‘s site. I found it instantly appealing because 1) it lays out exercises in an easy-to-understand visual format, 2) the exercises are manageable to do in short chunks of time, and 3) they mostly involve using one’s body weight. As I am lazy and cheap, doing a quick regimen that didn’t involve having to go to the gym or buying equipment was very tempting. I had to try it. I opted for the 30 Days of Change program to get myself re-acquainted with working out again.

The program involves 30 straight days of doing a combination of cardio and strength exercises, which are mixed up throughout the program so that you aren’t doing the same thing twice in a row. There are three different levels of workouts, which Neila calls “normal, hard, and freakin’ murder.” I started out on Level 1.

The first four days seemed easy to me– almost too easy. I figured that if it wasn’t a challenge, then I should level up. Big mistake. There is a significant difference between “normal” and “hard,” so when I attempted Day 5 at Level 2, I nearly lost it. The plank jacks and duck walks were so hard for me, that I admit I started crying during the last couple sets. From then on, I knocked back to Level 1 for the rest of the program.

I did a few modifications on some of the workouts– I swapped some of the running exercises for biking, and if I thought a particular day wasn’t challenging enough, rather than going up to the next level, I shortened the recovery time between sets instead. I did end up doing some running by Day 8, when I discovered that it was actually not too terrible.*

Somewhere past the halfway mark, I felt like I was getting stronger. I needed less time to recover, doing some of the cardio exercises didn’t leave me a total mess, and some exercises (like push-ups?!) actually got easier to do.

There is also a recommended menu, and I confess I didn’t follow it because I got sick during the program (not related to working out), and didn’t feel like I could do that change then. This may account for why I don’t see a dramatic change in my weight or my appearance. But I do feel really good– like I’m comfortable in my own body again, which I haven’t felt in a while. And more important, I feel like working out every day is easily achievable. I wake up a little earlier in the morning to exercise before I leave for work. It doesn’t take too much time out of my schedule, and I feel energized for the rest of the day. It helps to combat against the morning blues I had been feeling lately.

Even though I’m done this program, I want to keep exercising. My friend and I will be embarking on the 30 Days of High Intensity Interval Training (gulp!), and you can follow my progress on Twitter.

*I stopped running a long time ago because I kept getting injured. I do wonder whether I should come back to it, at least in a limited capacity as part of cross-training, because I think I’m starting to get repetitive strain in certain parts of my body from being on the bike every day. 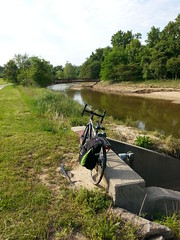 There comes a time in a blogger’s life when the blogger has dropped off from posting regularly, and feels compelled to apologize to loyal readers, no matter how minuscule the readership.

It’s been a difficult spring for me. I had somewhat of a mental breakdown last month. It’s been a long time coming, really. Even off the bike, I have a tendency to push myself pretty hard. I’m reminded of my time riding the Urbana 200K— mental toughness may be a virtue in some respects, but it has a boundary, and I crossed it some time ago. I completely fell apart, and am now in the process of rebuilding. It’s going to take a while.

Through it all, I kept biking. That was one of the few bright spots in my life in an otherwise bleak time. I enjoy my daily commute, riding through the woods, watching the trail greening in the warmer weather. I’ve been doing shorter group rides, but I’m having fun with those, too. Being outdoors on my bike rejuvenates me, even though the feeling is sometimes short-lived and disappears once I sit down at my desk.

This is all just to say that I’m sorry I haven’t been writing here regularly, but rest assured that I’m still bicycling. I haven’t given up yet.

My left knee has been bothering me for the past few months or so. I’m a little worried by it. Any recommendations for a good orthopedist?

Part of me is annoyed that the snow and ice here sometimes makes it difficult to ride without making changes to my bike set-up, and part of me likes to use it as an excuse for doing other things. I like to walk, hike, spin. Maybe to everything there is a season, as they say.

I’ve said this before on another blog, but I’m going to say it here: hilly miles do not equal flat miles. 100 miles is fun and fast on the Seagull Century, not so much on the Civil War Century. By the same token, an 8-mile commute would be fantastic if flat, but my route is not. On paper, it sounds easy. I should not beat myself up so much if I can’t ride this every day. And yet, I do beat myself up, still.