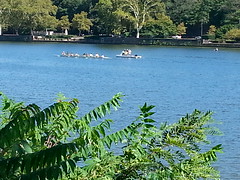 Three years ago, I had signed up for this ride, but a tropical storm canceled it. Schedule conflicts kept me from registering, until this year, when I finally decided to do the ride and not worry about the bazillion other things going on that same weekend.

The Scenic Schuylkill (pronounced like Skoo-kl) Century is an annual ride, organized by the Bicycle Club of Philadelphia. Although I had started riding as an adult in Philly, I had never done an organized ride in the city, much less be a part of a bicycle club. I had always ridden by myself. My friend Steve L, an avid bicyclist, had been trying to get me to do one of the BCP rides, but by the time I had gotten my act together to do that, I moved to DC. So, it’s been a dream of mine to ride the Schuylkill Century.
END_OF_DOCUMENT_TOKEN_TO_BE_REPLACED